In this post we will talk about Docker Swarm Mode.

We will start by talking about what is the Docker Swarm Mode. We will then look at use cases and look at the theory of work. In the next article, we will create a swarm cluster in our local machine and try it.

Swarm mode is a container orchestration tool for the Docker platform. As you know, we created container with Docker and solved many problems by running our application in docker environment. Later, with the docker compose structure, we could run multiple containers with a single command.

There is a Docker Swarm to go even further. We can manage our application consisting of DB, App Server, Web Server, Cache and MQ with Docker Swarm and scale under load, solve multiple point of failure problem by running multiple instances on multiple hosts.

In the latest versions of the Docker, Swarm mode is installed in-built. Let’s look at the Swarm mode capabilities;

Note: Docker Swarm keeps the previous version of each service. You can also roll back manually at any time.

We have stated that the Docker Swarm has more than one host (node). Nodes perform different tasks according to the role they have. This roles;

Note: By default, Manager nodes can run any tasks, so they can run services. But usually is not the right approach. You can ask why you are doing the default job :) My answer is: In order to work with the Docker Swarm mode, you must have at least one manager node in swarm. There is no requirement to worker. So you want to try SWARM and you can only try it by creating a manager node. You do not need to set up a second node. If we do not want the manager node run task, we will switch this feature.

Manager nodes use the RAFT algorithm to provide consensus among themselves. For example; leader election, RAFT is used in Docker Swarm. We will not go into much detail, but ** RAFT ** tells us that your cluster environment will work well with this math.

We have pronounced the service word many times. Services in Docker Swarm Mode also appear as tasks. The above mentioned components MQ, Redis, etc are some of the services. If they are working as a container, it is a task. Let’s try to show it right below; 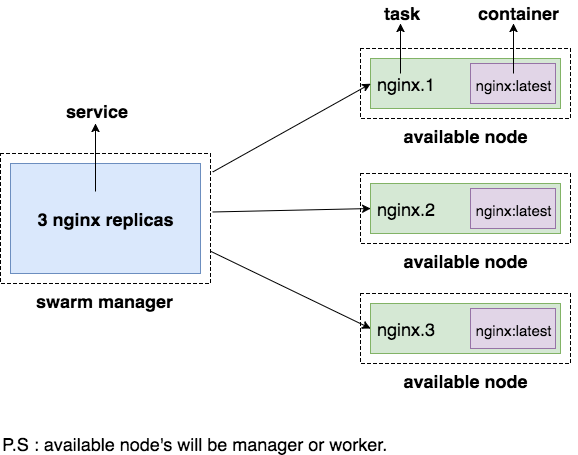 We have an nginx service definition and we want to run 3 instances of it. ** nginx ** is the our service, nginx.1, nginx.2, nginx.3 are tasks working on nodes. Docker Swarm will create and run a new task if any of these tasks is down.

Note: Many times we talked about instance number like 2, 3 and 4. It is recommended that the best practice is to set the number of instances to 0 for relevant service instead of deleting / removing a service.

The services we mentioned are only working in the swarm environment. So if you do not start a swarm or join swarm, you can not create a services on the docker engine. In Swarm environment, service will create only in the swarm manager node. In the next article we will make a lot of examples about services but it is beneficial to have theoretical knowledge.

There are 2 types of services. Global type and Replicated type.

Choosing one of the two types is quite easy, you can set it with the –mode parameter when creating a service. We will make an example in the next article.

Let’s look at the image; 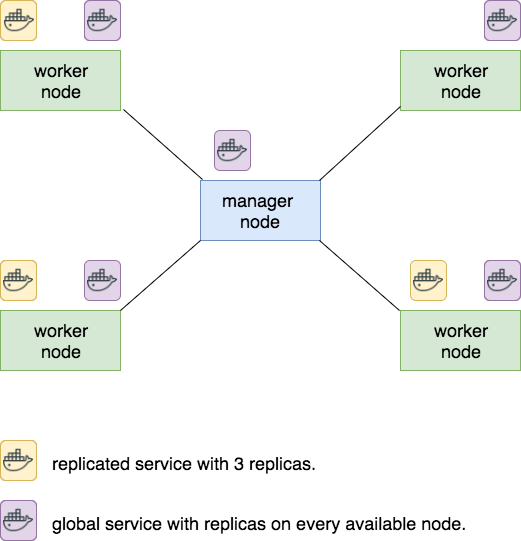 I end up writing Docker Swarm Mode here, next time we will create our own swarm environment and launch services.

If you think there is any mistake in the article, you can contribute here.